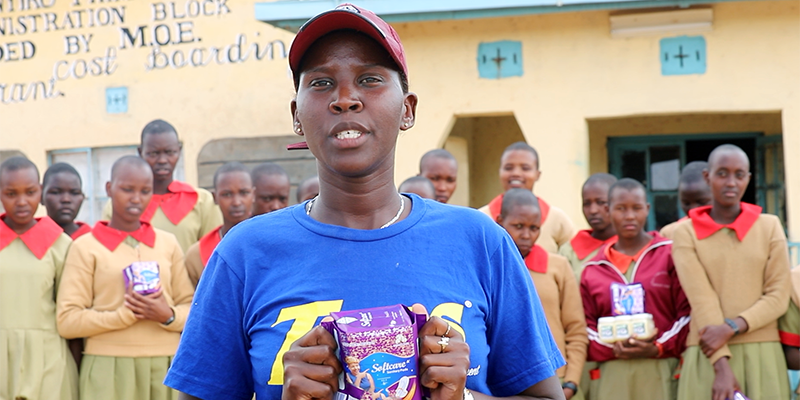 In an effort to mitigate the negative impacts of drought on adolescent girls, in 2022, Samburu Women Trust was able to distribute dignity kits which included sanitary towels, body oil and undergarments to vulnerable young indigenous girls in Oldonyiro and Kipsing locations in Isiolo County, two regions hit by the harsh climatic patterns.

Provision of these much-needed supplies will empower indigenous girls by boosting their self-esteem and confidence which in turn helps them to concentrate in their studies.

Distribution of sanitary kits to the young indigenous girls has been highly valuable in reducing the effects of harsh climatic patterns that has been causing adolescent girls to drop out of schools because the parents cannot afford to buy for them these essential items.

Most of the girls mentioned that drought heavily affects the family income in that the parents focus on providing food and hygiene items such as sanitary towels are not considered as important. A 15-year-old KCPE candidate girl from Oldonyiro Primary in the Oldonyiro community, mentioned that she was very happy with the items and said that the sanitary towels will ensure that she does not miss her final examinations and that it will boost her confidence during the examination period.

Joy and excitement were evident in these girls faces who received the dignity kits at Kipsing secondary school, a school in Oldonyiro Ward. During the interview, one of the female teachers at the school observed that the girls have very limited sanitary towels supply and even borrowed her when all the girls had none. She said that she knew for sure that these dignity kits will improve the school attendance of girls at least for the next three months.

Indigenous women in Lenguruma, Narasha, Kawalash and Kilio communities in Oldonyiro Ward, also received dignity kits to boost their confidence and will also not deter them from doing their day-to-day activities.

One of the challenges frequently mentioned by the teachers in these schools is that the county government does not reach the grassroot communities to distribute these items to the girls. It was recommended that provision of sanitary towels should be fully integrated as part of the drought response.

Distribution of dignity kits in Oldonyiro and Kipsing regions was made possible by kind aid from American Jewish World Service (AJWS) to strengthen the drought response in the marginalized communities.

The overall objective of the initiative was to strengthen the capacity of schools and communities to mitigate the negative effects of drought on the reproductive health of adolescent girls in pastoral communities.