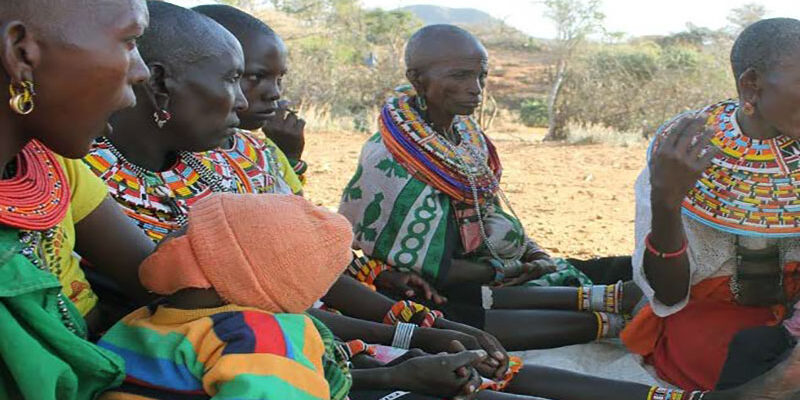 Hellen Leisono has taken it upon herself to spread the gospel of education across the village though she has never been to school.

During market days at Ol Donyiro Shopping Centre and at times in her home at Puruta village, you will find her engaging groups of women on hearty talks on why enrolling their children in school will bring the desired social change in the conservative pastoralist society.

Well known as Mama Riziki in the village, Leisono’s main interest has been on empowering the Samburu girl child.

“Educating our daughters is the only way to rescue them from harmful cultural practices such as beading, Female Genital Mutilation and early marriages.

We have to be bold enough to tell our husbands why we have to take all our daughters to school,” Mama Riziki tells a group of eight women during a meeting at her homestead one Thursday afternoon.

In this community, educating a child is considered a form of punishment. Those who are not good at herding are allowed to go to school by their parents while those deemed to be hard working at home and hence productive in the pastoralist way of life are the favorites in the family.

“This kind of attitude has to change and realize that every child deserves to be in school. I have been using a friendly approach to women in my neighborhood and this has borne fruits,” she says.

Through her efforts, tens of girls have been rescued from beading and forced early marriage and have enrolled in school. Beading is a practices where morans (community warriors) turn girls, some as young as ten into sex slaves with the blessings of the girl’s mother.

This sometimes leads to pregnancy, resulting to crude abortion since babies born out of this relationship are considered outcasts.

She is a single mother who overcame societal stigma to be a beacon of hope among tens of women in her community who find themselves in such a situation.

She is economically empowered, with cattle, goats and camel at her homestead, something that earns her respect and attracts women eager to know how he managed to turn around an unfortunate situation of being a single to a successful women in the community.

In her relentless campaigns on education, Mama Riziki has been seeking the support of the Ol Donyiro Catholic Mission to have the girls admitted to the boarding facilities to minimize risks of dropout. She also involves the area chief to ensure the safety of the girls during school holidays.

For her efforts, she has won national and global recognition were she is invited to conferences on women issues.
Recently, she toured Guatemala in South America through the support from Pawanka Fund through Samburu Women Trust.

She says the tour gave her a wider exposure on the challenges indigenous women face worldwide, an experience she will be sharing at local and national forums.

“Most of the challenges facing indigenous women and girls can be overcome through education. I will continue stressing education until there will not be a single girl child herding cattle and waiting to be married off to an elderly suitor,” she says.