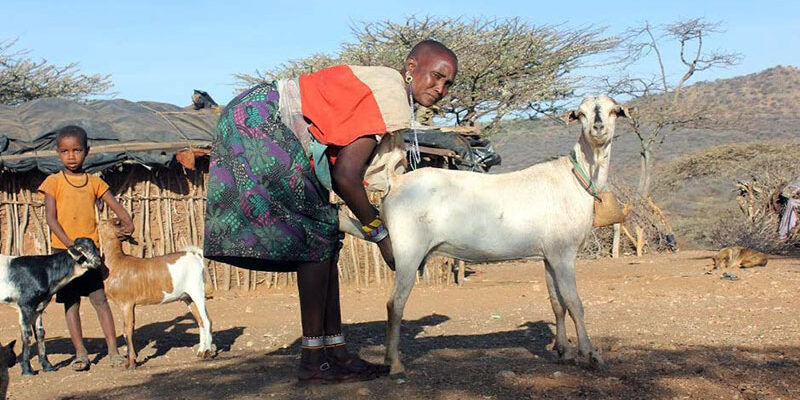 Though her husband was gentle and kind, his brothers were cruel and enjoyed harassing the new bride Noonkishu Lepiranto for no apparent reason.

“I became fed up with the harassment and decided to return to my parents’ house.” “I persuaded my husband to accompany me even though I didn’t have a child at the time,” she recalls. Her parents, she claims, were supportive and offered them lodging, as well as the livestock they had brought with them.

However, after a few months, her in-laws paid a visit and took away the cattle, camels, and donkeys, leaving the young family without a source of income.

Through the support of her parents and specifically her brother Lekaldero, she was able to pick up the pieces and now became the provider of her husband until his death. He was buried at his wife’s homestead.

“I am the one who encouraged my sister to come back home to escape the harassment and intimidation she was enduring at the hands of her brother-in-law.

She is hardworking and even after the livestock was taken away, she has been able to stand on her feet with relying on my support,” says Lekaldero.

Lepiranto says her parents’ gesture to accept her back with her husband is not common in the community.
“Once you are married off and the bride price given out, you are supposed to stick to your new home no matter the circumstances.

My case is rare and my family has set a good example to parents not to subject their daughters to harsh environment in the name of marriage and bride price,” says the mother of four.

Lepiranto owns some goats which are the source of food and income to educate her children. Her two sons are in secondary school while the last born is in primary school.

Her message to single or divorced women to stand up and speak with one voice and do not accept to be treated as second class people.

She however adds that women who find themselves in such a situation needs empowerment and emotional supports since at times the society is hostile.

Her bother advices parents to accept back their daughters in cases where the marriage totally fails.

“While it is a fact that nearly all marriages are smooth, there are some which are a source of torture to an individual and it is in such cases that interventions can be made,” says Lekaldero, a married father of five.